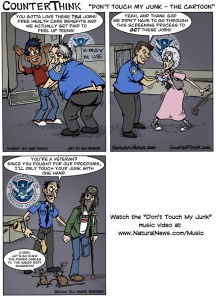 Our nation has never seen such a blatant attack on its 4 Amendment rights since the implementation of the TSA (Terrorist Searching Americans) enhanced pat downs last fall. It should have been no surprise that an Administration and Congress (pre-Nov 2010) would have allowed such assaults on the public, since this was the same leadership that has accosted our rights since January 2009. I am not about to embark on that list now since the primaries are just around the corner. However, this violation of rights has pushed this nation to the brink of outright rebellion. I am not sure if it was the video molestation of 6-year-old kids or grandma being raped via pat down that has struck a nerve Obama somehow missed in the past. It may just be another level of being fed up with The Communist One and his followers.

The funny thing is that here is a topic where conservatives and liberals seem to have some common ground – this is not the practice of a free nation. Both sides agree that this is an insult to our civil liberties and that without a correction in course will mean victory for the terrorists. TSA bashing is rampant all over the web. Here is a current YouTube parody song to the tune of Grandma Got Runover By A Reindeer:

Taking shots at the Republicans in the 112th Congress for not stopping the assault is not proper here, as we have already seen where they passed the legislation to repeal Obamacare only to see it die in the Senate. Harry Reid knows his majority is slim, but a majority it is for now and he will wield that power until the bitter end on keeping the socialist agenda in place.

Just as it was the States that gave life to the Republic, it is up to the States to stop this nonsense. The 9th and 10th Amendments were penned with a purpose the Founding Fathers had witnessed all too well in Britain – too much centralized power in government erodes the liberties of mankind.

Obamacare has been challenged by over half of the States in the nation and are making headway through the Courts. With issues of zero enforcement of immigration laws on our southern border, States took the initiative to reign in the madness. Arizona took a bold step and a heap of criticism for SB1070, better known as the Arizona Immigration Bill. That bill, while taking some hits and blocks of hard-hitting portions of the bill by federal judges recently, sent a strong message that if the feds will not enforce US Law that the States will do it. While that fight will end up in front of the Supreme Court in the end, it has started other states to follow with similar legislation.

Now it is time to dismantle the TSA’s pat down and x-ray procedure and it will start at the State level once again. Texas is leading the charge on this with the passage of House Bill 41. Now, this bill is not the same version of the one introduced during the regular Session of the Texas Legislature. The original bill would have criminalized the procedures of the TSA. That version of the bill left the House and was on way to the Senate when it imploded during debate after US Attorney John Murphy suggested that the TSA might have to cancel flights over such a bill and challenge the bill in court. That was probably horse manure, but it was enough to derail the bill in the regular Session. Governor Perry added the bill to the docket of the Special Session after extreme pressure from the grass-roots and the bill has been at the top of the watch list of the Special Session.

What has added fuel to this fire has been current Texas Speaker of the House Joe Strauss’ comments regarding the TSA bill being in the Special Session. Strauss made an absolute ass of himself this past week calling the bill a “publicity stunt”. Guess Joe is not flying much these days or prefers the touch of latex across his business. The article was all over the state and here is one of many on the topic: http://blog.chron.com/texaspolitics/2011/06/speaker-calls-governors-anti-groping-bill-a-publicity-stunt/ You may recall the stink made over Strauss being re-elected Speaker by House Member pledges and not the will of the constituents. In Texas, Joe has ensured that his name will be on the lips of every State Rep seeking election for 2012. Look for Strauss to be challenged in his District in the Spring Republican Primary.

Texas Attorney General Greg Abbott, who has been engaging the Obama Department of Justice over Obamacare and has insight into their tactics, has made some wording changes to survive federal challenges that are sure to come. You can read the version at here: http://www.legis.state.tx.us/BillLookup/History.aspx?LegSess=821&Bill=HB41 While the bill does not criminalize the TSA actions as prior, it is a version the Senate should adopt with minor revisions and be signed into law by Perry. The key changes are inserting “reasonable suspicion versus probable cause” as well as making the violations misdemeanors instead of felonies. What is left is the defining of the actions that can be enforced under Texas Law. If physical contact occurs where the person doing the touching could be perceived as provocative or offensive, it will violate Texas Law.

What this does is give the TSA notice Texas will enforce this issue for the people. Will the Obama DOJ go after the bill? Sure they will. However, the Federal Judges in the Texas Districts are pretty hard-core conservatives, so Obama’s DOJ will not get much help there. If they push it to the Supreme Court, the current TSA procedure is likely to come under 4th Amendment scrutiny. In either case, it will be a victory for liberty.

2 responses to “Dismantling the TSA”