Folks, aside from Barry’s Change & Hope Socialist aspirations, there is even a greater enemy out there wrecking havoc on America that has went under the radar for too long. I am talking about the Chinese. We have been under every form of economic attack for some time, going back into the 1990’s. They have a load of slave labor that has been ridden to dizzying heights for technology and industrial development. Development that undermines civilized labor in other countries, including our own, and has allowed a plethora of inexpensive goods to flood the market.

Now, we all know that this is not the first time we have heard this song and dance. In the late 70’s and early 80’s Mexico played this part. Then Japan in the 80’s, theN Korea in the 90’s, etc. Any  place that had cheap labor worked for a while until the labor wanted a greater standard of living and wages rose. While that has happened to a small degree in China, wages in that country have in no way come anywhere near any other industrialized nation for one simple reason – China is a communist state and will never allow the wages to become an issue.

China also has a large tract of land and more people than anyone else, so it would take generations for the wages to come up to middle class levels even if they were a capitalist state.

While the Chinese dump goods on the US, if you want access to the Chinese market, you build a factory there and employ their citizens. Hmm – kinda like that and maybe we should employ this tactic on companies seeking foreign trade with the US……. Free markets are only free when the playing fields are level. In our case with China, that would require about a 50% tariff. Our current tariff on their goods  is under 5%…… Even on the US goods built in China, the Chinese place a 20 plus % tariff on. Someone explain to me why he have chosen to take it direct in the shorts from the Chinese?

China’s greatest issue is its lack of natural resources. That have no oil, gas, or coal to speak of. They are importing everything and pollute beyond any reasonable measures of control. They are promoting a toxic environment for their folks that is creating severe health issues and ultimately they could end up completely poisoning themselves into seeking new ground. Currently, they are buying JP54, D2, Mazut, and crude oil from the Russians. THE RUSSIANS! Yeah, one commie country making another one rich. Have to hand it to the Ruskies – they do not let their environmental zealots run their country and are banking billions along the way while we sit back and cut off drilling permits from US companies. The Chinese are buying iron ore from Mexico, Brazil, and Australia in record amounts with all the cash they have from our stupid butts buying their products. Does anyone ever wonder why they have been building one huge military? Were you aware that the treasonous bastards at GE are selling military level avionics to the Chinese?

It is time to deal with the Chinese. We should have allowed McArthur to engage with the Chinese last century when we could and would have whipped their butts straight up. Now, 60 some odd years later after allowing everyone to copy the US economic plan and out perform us, we get to deal with these people on a level where they have the upper hand. Not our brightest move. Reagan would have never steered this nation down this path, but then Reagan was a man and we have the man-child. I am not a fan of tariffs, but I will make an exception for the Chinese along with the investment in plants and US citizens to sell products here. Time to fight fire with fire.

Oh, and for those that argue the Chinese have great quality to go with those great prices, check this little story from China on their construction techniques http://www.hoax-slayer.com/13-story-buliding-collapse-china.shtml That was from 2009.

Still feeling good about all the crap you buy from China?

THEN FIND A WAY TO BUY AMERICAN AND PUT THESE CHUMPS OUT OF BUSINESS.

Ever wonder where the phrase “idiot stick” came from? Wouldn’t it be cool if Nerf or someone would come out with such a neat device we could have some fun with liberals with?

In 1958, writer Damon Knight published a short story about aliens landing in New Jersey and putting humans to work by making them “feel good” from a capsule given from the aliens. It has some interesting parallels to the lulling of the electorate by DC currently.

Here is the synopsis of the story –

Aliens land in New Jersey, in a mile-long space ship. They request 500 acres (2.0 km2) of level ground to erect buildings, and induce humans to work for them by passing out capsules that produce a feeling of temporary bliss. The workers are given sticks, each a “light metal or plastic rod, five feet long, with a curved handle and a splayed tip”:

“When the command ‘Go’ is heard,” said the alien’s voice clearly, “you will all proceed directly forward at a slow walking pace, swinging your sticks from side to side.”

The sticks flatten the ground in front of the people as they walk. Later the aliens make adjustments in the sticks, and the ground bulges up into walls. Eventually an enormous building takes shape.

The aliens are circumspect about their motives. One alien, Pendrath, is fond of fraternizing with humans. On one occasion he becomes drunk (from aspirin), and lets slip that the building will house a giant drill, which will be used to place a bomb in the core of the Earth. The purpose is to increase the amount of dust in the space around the Sun as a means to slow down spaceships and to protect the aliens from invasion.

The humans become desperate to find a defense. They modify the “idiot sticks” at random; each modification causes the stick to become unstable and to kill its operator. Eventually a pattern is found that is stable and that is lethal to the aliens. A mob storms the ship and the aliens are killed.

So what’s the parallel here? Well, the liberals are the aliens trying to enslave the American people through government entitlement programs. They have been doing a dandy job in reconstituting slavery in America since the end of World War I, they have just been propagating it in a different manner. Gone are the days of Master beating the downtrodden slave with a whip. Now, Master is the “benevolent” government bureaucrat handing our feel good treats in the manner of unrestricted renewable energy grants, welfare money to single mothers to keep them producing the future livestock for abuse, abortion programs funded by federal dollars to promote the destruction of life from within the nation, and of course  providing the masses with “free” healthcare to ensure they keep coming back for more.

Just like the beings in Knight’s story, the Obama supporters have been given their idiot sticks as well. These sticks were not to swing at the ground, but to pounce upon any racist that dared to defy The Supreme Liberal Alien Obama – such as the Tea Party scum. While buildings were not erected with these sticks, large barriers of stupidity, ignorance, racism, and hate were erected instead to quash the ideas of Constitutional basis for law, individual responsibility, liberty, and a capitalism form for the economy.

The Liberals here have also become drunk, not from aspirin, but raw power. In the drunken stooper, they let slip comments like “…they cling to their God and their guns…”, “. We have to pass the bill to see what’s inside the bill.”, or as one of the liberal champions Harry Reid commented on a visiting crowd to DC”…is that smell coming from back there?…” Yes, the aliens have let loose lips slip the overall agenda of transforming America into a communist state as soon as possible. While there will be no bomb dropped to the center of the earth (Liberals can’t allow drilling because you might hit oil), they are working overtime to “bomb” us to death with untold trillions of debt.

As with Knight’s humans in his story, the United States Conservative Movement has awoke and is on a path of defense of Constitutional liberties and improving their methods of aggressive reclamation of lost liberties. Conservatives have taken the idiot stick from liberals and used it to beat back these aliens to once again restore liberty in the nation. The first phase of storming the alien mothership (Capitol Hill) was successful in 2010 by placing more conservatives in the US House of Representatives. The next offensive is scheduled for November 2012 when the US Senate and Presidency will be taken back. Unlike the short story, we anticipate no casualties but a peaceful transition of power.

Unless of course the aliens turn violent against change and then all bets are off.

If that happens, you could see a whole lot of idiots being actual hit with that proverbial stick.

Lord of the Ring of Fools 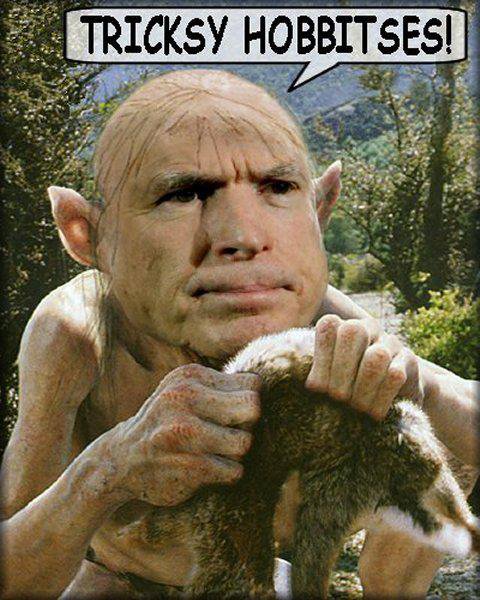 Well I cannot tell you how much I enjoyed to have the characters of JRR Tolkien’s Middle Earth being brought into the debate as things wound down on the debt debate charade of the year. You see The Hobbit, Lord of the Rings, and the granddaddy of them both – The Silmarilian, were books I tore through from cover to cover on many an occasion. I was a Tolkien nerd from the standpoint of knowing every crest of the houses of Elf, Man, and Dwarf and I even had mastered a bit of Elvish. So when Arizona Senator John McCain invoked hobbits as a Tea Party Activist descriptor, Tolkienites throughout the land heard him loud and clear,

Now before I sear a layer of flesh from McCain (hereinafter known as “McGrump”), I need the set the record straight on what characters in Middle Earth align with the current reign of darkness in Mordor (formerly known as Washington DC). I have seen some match ups on the web, best we need to be unified and concise out of respect for the characters in fiction and slap around the characters in flesh. Here is my list and I hope you enjoy it:

That’s the current list and it is absent a few names. Still not sure where Boehner fits in. His stocked dropped over the debt deal with me. I need more time to match him up.

Back to McGrump – while he was attacking the Tea Party when he used the term “hobbits”, Mc Grump may have actually place a prophecy in motion. It was the hobbits that would save Middle Earth from all its evils of Saruman and Sauron. The Tea Party is a movement of Constitutional conservatives from all walks of life that are demanding political change, engaging in the election process, and beginning to see a turn in the tide of communist backwash that has flown for so long against our great nation. Perhaps the Tea Party Movement will indeed save our great nation from its current evils, although it will not be without similar battles (whether real or political) witnessed by the participants in Middle Earth.

So in preparation for the long journey ahead, remember to always have a positive attitude towards life, have plenty of your favorite spirits around, and quit shaving your feet.